This month I will be discussing two issues. One of interest to many people who come to us with questions on the Github Issue Tracker and the #beast channel of Cpplang Slack.

Compile Times and Separation of Concerns

This is a valid complaint and we believe there are some reasonable tradeoffs we can make by refactoring the websocket stream to use fewer templates internally. Vinnie has started work to express the WebSocket’s intermediate completion handlers, buffer sequence and executor in terms of a polymorphic object. This would mean a few indirect jumps in the compiled code but would significantly reduce the number of internal template expansions. In the scheme of things, we don’t believe that the virtual function calls will materially affect runtime performance. The branch is here

I will be continuing work in this area in the coming days.

In the meantime, our general response is to suggest that users create a base class to handle the transport, and communicate important events such as frame received, connection state and the close notification to a derived application-layer class through a private polymorphic interface.

This approach has a number of benefits. Not least of which is that developing another client implementation over a different websocket connection in the same application becomes trivial.

Another benefit is that the application can be designed such that application-level concerns are agnostic of the transport mechanism. Such as when the server can be accessed by multiple means - WSS, WS, long poll, direct connection, unix sockets and so on.

In this blog I will present a simplified implementation of this idea. My thanks to the cpplang Slack user @elegracer who most recently asked for guidance on reducing compile times. It was (his/her? Slack is silent on the matter) question which prompted me to finally conjure up a demo. @elegracer’s problem was needing to connect to multiple cryptocurrency exchanges in the same app over websocket. In this particular example I’ll demonstrate a simplified connection to the public FMex market data feed since that was the subject of the original question.

Our examples in the Beast Repository are rudimentary and don’t cover the issue of graceful shutdown of an application in response to a SIGINT (i.e. the user pressing ctrl-c). It is common for simple programs to exit suddenly in response to this signal, which is the default behaviour. For many applications, this is perfectly fine but not all. We may want active objects in the program to write data to disk, we may want to ensure that the underlying websocket is shut down cleanly and we may want to give the user an opportunity to prevent the shutdown.

I will further annotate the example by providing this ability to prevent the shutdown. The user will have to confirm the first SIGINT with another within 5 seconds to confirm.

When I write IO applications involving Asio and Beast, I prefer to create an “application” object. This has the responsibility of monitoring signals and starting the initial connection objects. It also provides the communication between the two.

The construction and configuration of the io_context and ssl::context stay in main(). The executor and ssl context are passed to the application by reference as dependencies. The application can then pass on these refrences as required. It is also worth mentioning that I don’t pass the io_context’s executor as a polymorphic any_io_executor type at this stage. The reason is that I may want in future to upgrade my program to be multi-threaded. If I do this, then each individual io_enabled object such as a connection or the application will need to have its own strand. Getting the strand out of an any_io_executor is not possible in the general case as it will have been type-erased, so for top level objects I pass the executor as io_context::executor_type. It is then up to each object to create its own strand internally which will have the type strand<io_context::executor_type>. The strand type provides the method get_inner_executor which allows the application to extract the underlying io_context::executor_type and pass it to the constructor of any subordinate but otherwise self-contained io objects. The subordinates can then build their own strands from this.

OK, let’s get started and build the framework. Here’s a link to step 1.

ssl.hpp and net.hpp simply configure the project to use boost.asio. The idea of these little configuration headers is that they could be generated by the cmake project if necessary to allow the option of upgrading to std networking if it ever arrives.

As a matter of style, I like to ensure that no names are created in the global namespace other than main. This saves headaches that could occur if I wrote code on one platform, but then happened to port it to another where the name was already in use by the native system libraries.

main.cpp simply creates the io execution context and a default ssl context, creates the application, starts it and runs the io context.

At the moment, the only interesting part of our program is the signit_state. This is a state machine which handles the behaviour of the program when a SIGINT is received. Our state machine is doing something a little fancy. Here is the state diagram: 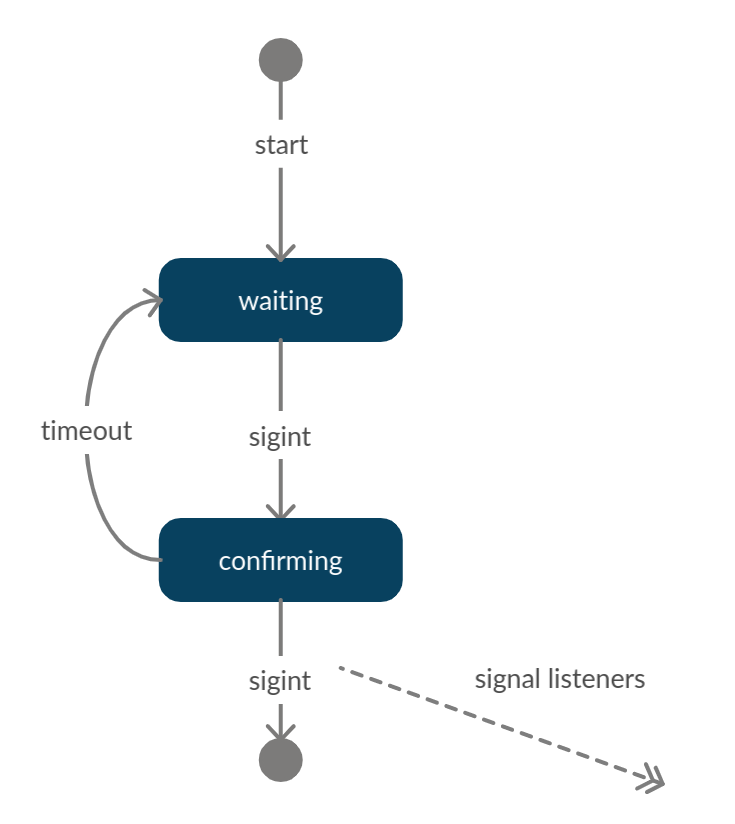 Rather than reproduce the code here, please refer to step 1 to see the source code.

At this point the program will run and successfully handle ctrl-c:

Step 2 - Connecting to an Exchange

Now we need to create our WebSocket transport class and our FMex exchange protocol class that will derive from it. For now we won’t worry about cancellation - we’ll retrofit that in Step 3.

Here is the code for step 2.

This section introduces two new main classes - the wss_transport and the fmex_connection. In addition, the connection phase of the wss_transport is expressed as a composed operation for exposition purposes (and in my opinion it actually makes the code easier to read than continuation-passing style code)

Here is the implementation of the connect coroutine:

Here we define the implementation of the coroutine - this is an object which will not be moved for the duration of the execution of the coroutine. This address stability is important because intermediate asynchronous operations will rely on knowing the address of the resolver (and later perhaps other io objects).

The constructor merely forwards the arguments to the construction of the impl_data.

This coroutine is both a composed operation and a completion handler for sub-operations. This means it must have an operator() interface matching the requirements of each sub-operation. During the lifetime of this coroutine we will be using the resolver and calling async_connect on the tcp_stream. We therefore provide conforming member functions which store or ignore the and forward the error_code to the main implementation of the coroutine.

Here is the main implementation of the coroutine. Note that the last two parameters provide defaults. This is in order to allow this member function to match the completion handler signatures of:

The wss_connection class provides the bare bones required to connect a websocket and maintain the connection. It provides a protected interface so that derived classes can send text frames and it will call private virtual functions in order to notify the derived class of:

Connection errors will only be notified once, and once a connection error has been indicated, no other event will reach the derived class.

One of the many areas that trips up asio/beast beginners is that care must be taken to ensure that only one async_write is in progress at a time on the WebSocket (or indeed any async io object). For this reason we implement a simple transmit queue state which can be considered to be an orthogonal region (parallel task) to the read state.

You will note that I have used a std::deque to hold the pending messages. Although a deque has theoretically better complexity when inserting or removing items at the ends than a vector, this is not the reason for choosing this data structure. The actual reason is that items in a deque are guaranteed to have a stable address, even when other items are added or removed. This is useful as it means we don’t have to move frames out of the transmit queue in order to send them. Remember that during an async_write, the data to which the supplied buffer sequence refers must have a stable address.

Here are the functions that deal with the send state transitions.

Finally, we can implement our specific exchange protocol on top of the wss_connection. In this case, FMex eschews the ping/pong built into websockets and requires a json ping/pong to be initiated by the client.

Note that since we have implemented frame transmission in the base class in terms of a queue, the fmex class has no need to worry about ensuring the one-write-at-a-time rule. The base class handles it. This makes the application developer’s life easy.

Finally, we implement on_text_frame and write a little message parser and switch. Note that this function may throw. The base class will catch any exceptions thrown here and ensure that the on_transport_error event will be called at the appropriate time. Thus again, the application developer’s life is improved as he doesn’t need to worry about handling exceptions in an asynchronous environment.

Compiling and running the program produces output similar to this:

Note however, that although pressing ctrl-c is noticed by the application, the fmex feed does not shut down in response. This is because we have not wired up a mechanism to communicate the stop() event to the implementation of the connection:

You will remember from step 1 that we created a little class called sigint_state which notices that the application has received a sigint and checks for a confirming sigint before taking action. We also added a slot to this to pass the signal to the fmex connection:

But we didn’t put any code in wss_transport::stop. Now all we have to do is provide a function object within wss_transport that we can adjust whenever the current state changes:

We will also need to provide a way for the connect operation to respond to the stop signal (the user might press ctrl-c while resolving for example).

The way I have done this here is a simple approach, merely pass a reference to the wss_transport into the composed operation so that the operation can modify the function directly. There are other more scalable ways to do this, but this is good enough for now.

The body of the coroutine then becomes:

The final source code for step 3 is here.

Stopping the program while connecting:

And stopping the program while connected:

Next month I’ll refactor the application to use C++20 coroutines and we can see whether this makes developing event based systems easier and/or more maintainable.

All Posts by This Author